The eastern tip of Oak Island is figuratively guarded by the long abandoned Fort Caswell, a centuries old but still relatively intact structure that originally encompassed a huge portion of the island. Today, the structure is a landmark within the Fort Caswell Retreat, occupied by the North Carolina Baptists Assembly, and even though the fort hasn't fired off a cannon in decades, it is still an imposing and impressive sight along the edge of Oak Island's eastern beaches. 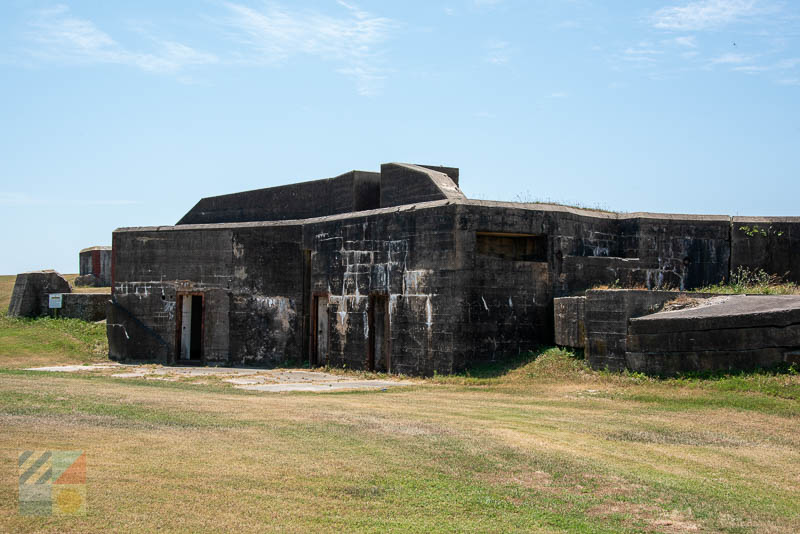 The original site for the fort encompassed a whopping 2,200 acres, and took up the majority of Oak Island. While the island was relatively deserted up until that point, by the time construction began in the mid to late 1820s, hundreds and even thousands of soldiers were being sent to staff the new station, essentially leading to the formation of the Oaks Island community. 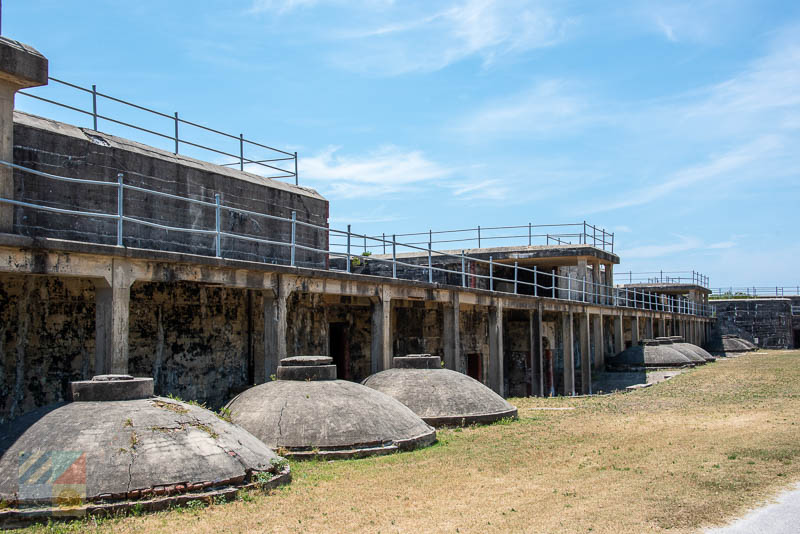 The fort was complete by 1836, and was built for the sole intention of protecting the region, specifically the mouth of the Cape Fear River, from pirates who loved to hunt along the small North Carolina barrier islands and busy inland port communities. The original structure was a pentagon shape, built with bricks and earthen mounds, and was fortified with 61 gun emplacements. Deemed one of the strongest forts along the coastline, Fort Caswell would go on to prove its mettle, just 25 years after it was constructed, during the Civil War. 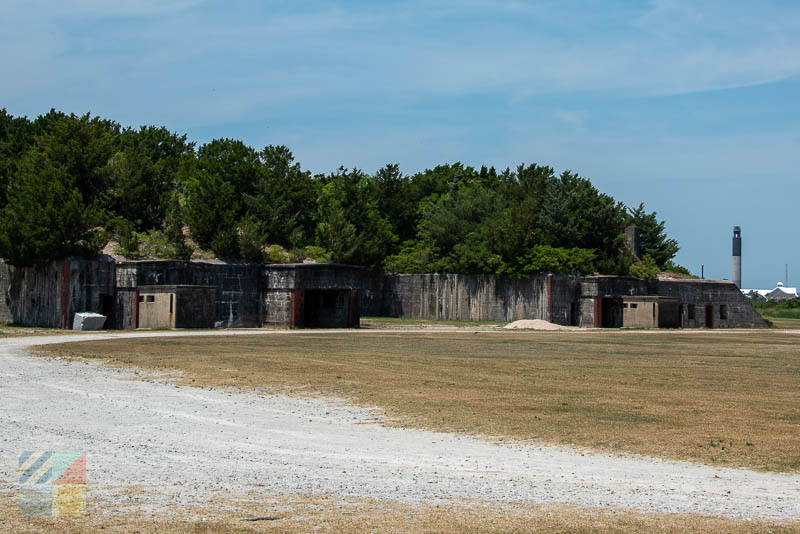 When North Carolina seceded, the Confederate Army determined that Fort Fisher and Fort Caswell were two of their most important stations, as they both shared the duties of protecting the southern city of Wilmington, a key port for the shipping and acquisition of goods, weapons and supplies. The Union soldiers soon realized as well that by shutting down the forts, and stopping the blockade runners, they could cut the south off from the rest of the world, and made numerous attack plans to shut Fort Caswell down. In fact, six attacks were launched on the fort by the Union, and yet all were unsuccessful. This was due to both the strength of the fort itself, in addition to the fort's Oak Island location. Surrounded by the dangerous Frying Pan Shoals, which have been the cause of countless shipwrecks over the years, many ships were deterred from launching an attack well before they even came close to shore.

Fort Caswell was never invaded during the Civil War, in fact, but after neighboring Fort Fisher fell on January 15th, Fort Caswell was quickly ordered to destroy all of the weapons on site, burn the barracks, and set off all of their explosives. The result was a massive explosion that could be heard all the way to Fayetteville, North Carolina, and the destruction of one entire wall of the fort. In the end, however, not one solider at Fort Caswell died due to combat, (however several died of disease, and one solider, deemed a deserter, was executed on the site.)

Unlike many other coastal forts of the Civil War era, the fort remained active long after the war ended. The U.S. Army transformed the site into a full military reservation in the 1890s, and the station was even of the most important military posts along the southern Carolina coast during World War I. After the first World War though, with the country predicting a long period of peace, the fort was abandoned for good by the government, and the site was relatively deserted until it was designated as "state surplus" property and put up for sale. 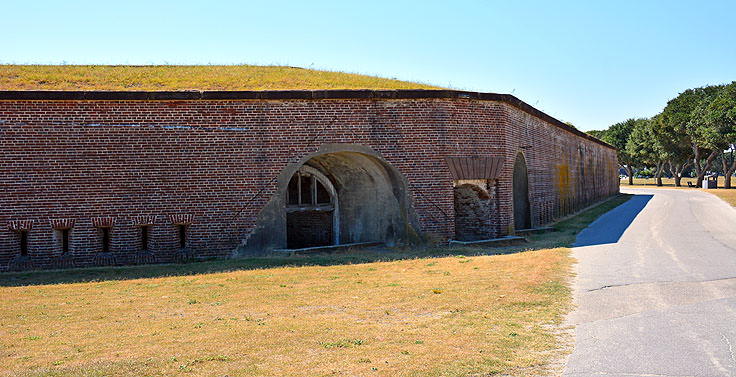 The now 250 acre fort site, which bordered both the ocean and the mouth of the Cape Fear River, was soon purchased by the Baptist State Convention of North Carolina in 1946 for the price of $86,000. The North Carolina Baptist Assembly went to work over the next few decades adding accommodations along the way, and today, more than 10,000 visitors pass through the all-inclusive retreat on an annual basis. 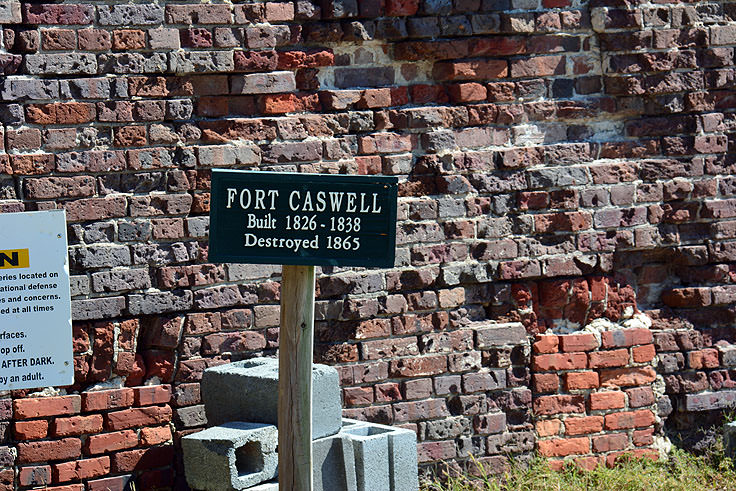 The aim of the North Carolina Baptist Assembly's retreat center, known more commonly as simply "Fort Caswell," is to offer NC Baptists and other visitors a place of quiet reflection and relaxation, and with the gorgeous setting and natural waterfront backgrounds, the retreat certainly succeeds in its goal.Hotel-style lodging is available for retreat visitors in the Smith Convention Center, the Oceana Hotel, Lantana Lodge, and the four officers' quarter buildings. Additional dormitory-style housing can also be found on sight, which includes six residence halls, and 12 complete cottages with beds, kitchens and dining facilities, ensuring a relaxing vacation with all the comforts of home. 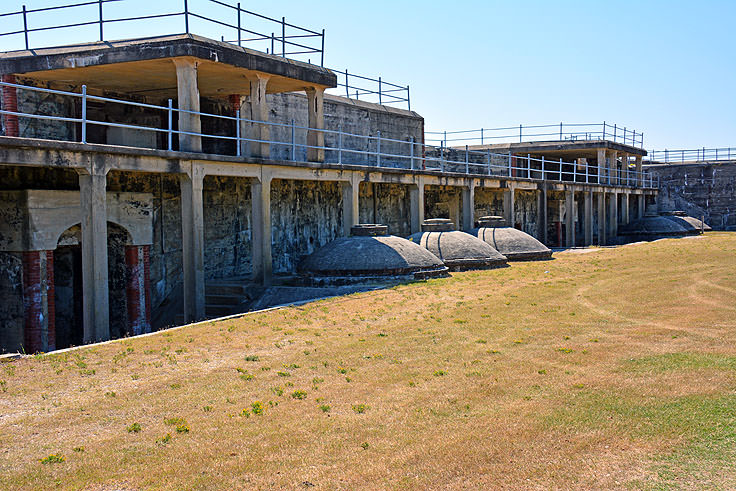 Rates can range from around $18 dollars per night for dorm accommodations to $65 per night for a private hotel room, and Fort Fisher offers a number of fun community-wide amenities as well, including kayak rentals, seasonal lifeguards, a community pool, tennis court, softball diamond, and incredible beach access. There's even an indoor gym, an 18 hole mini-golf course, and a fishing pier located at the very end of the island for incredible angling. In addition, Fort Caswell offers a number of activities for special groups, (such as choirs or congregations), and children, including religious retreats and summer camps. A marina is also located on site for visitors arriving by boat, and special guided tours of the fort itself can be arranged by special request and with plenty of advanced notice. 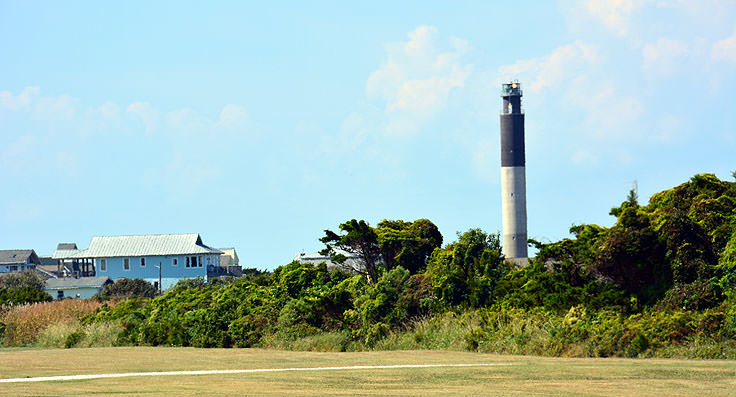 Fort Caswell is open year-round, and reservations for any of the lodgings within the retreat can be made by visiting the coastal retreat and conference center's website.

Once the site of one of the strongest military forts to grace the East Coast, and now the venue for summer fun for thousands of vacationers, Fort Caswell has undergone quite a transformation during its nearly 200 year existence. A unique and still-standing notable attraction for Civil War fans and Fort Caswell visitors, the site is a remarkable landmark that is sure to, at least temporarily, steal the scene from Oak Island's incredible beaches. 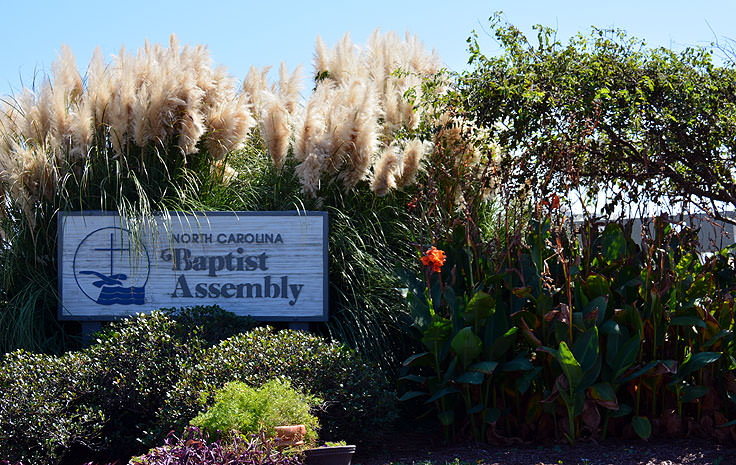 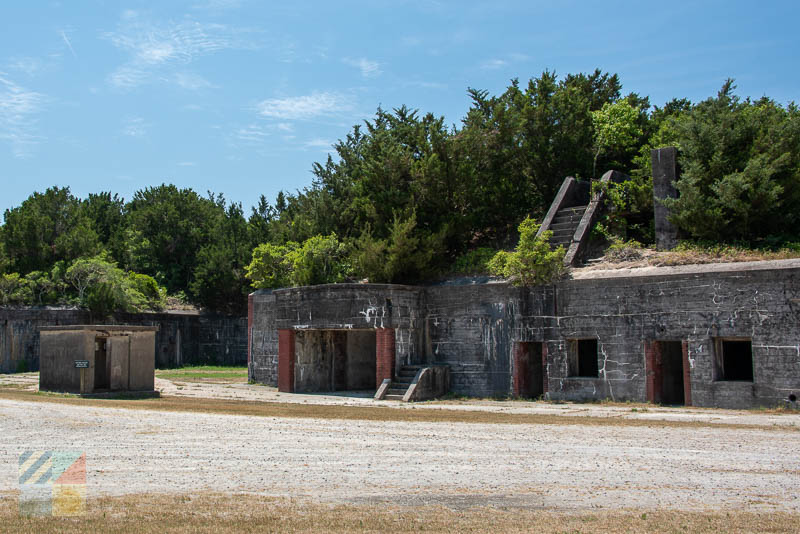 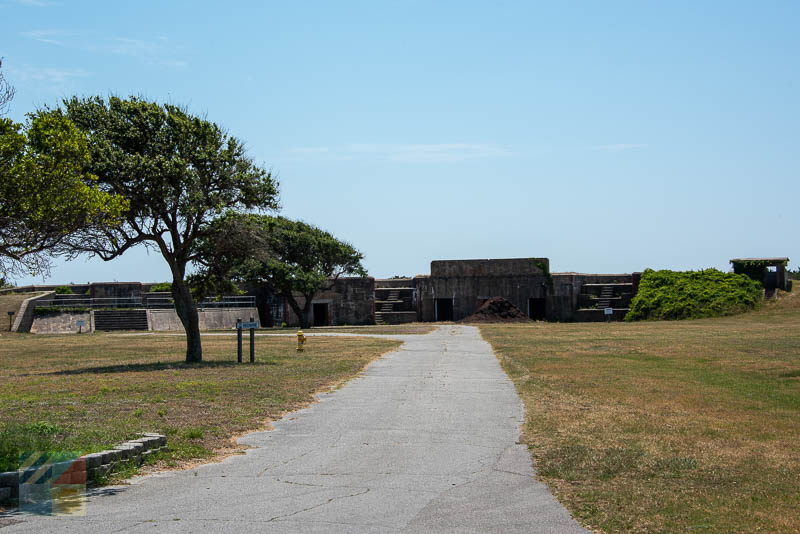 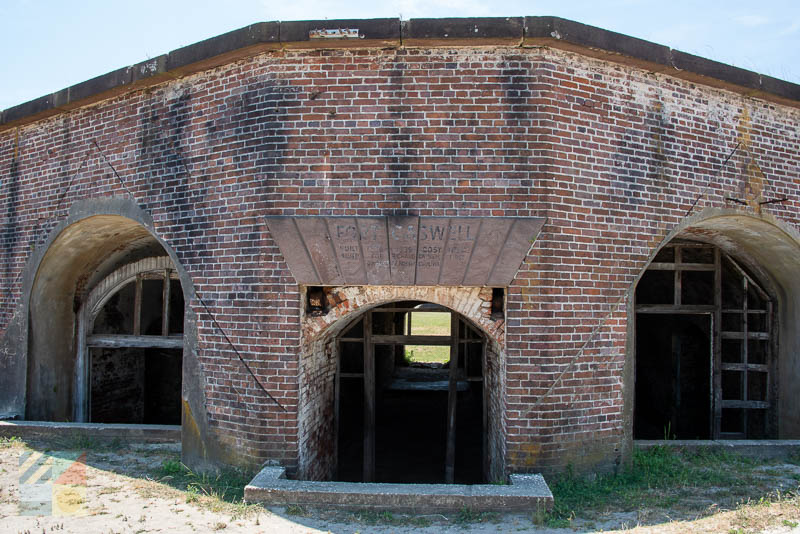 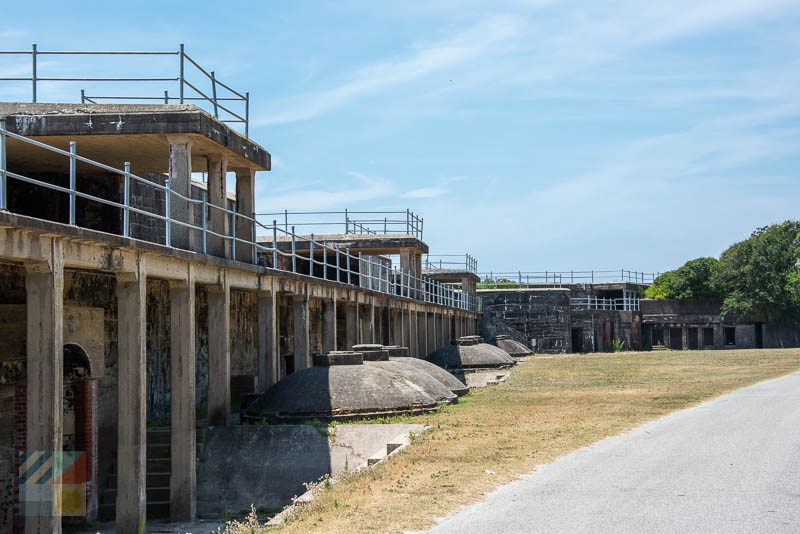 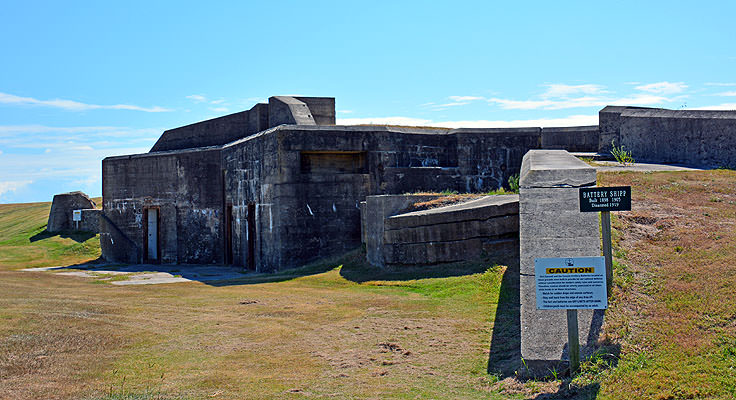 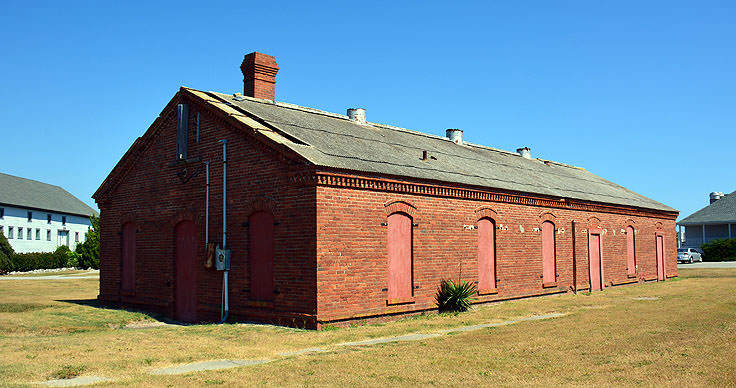