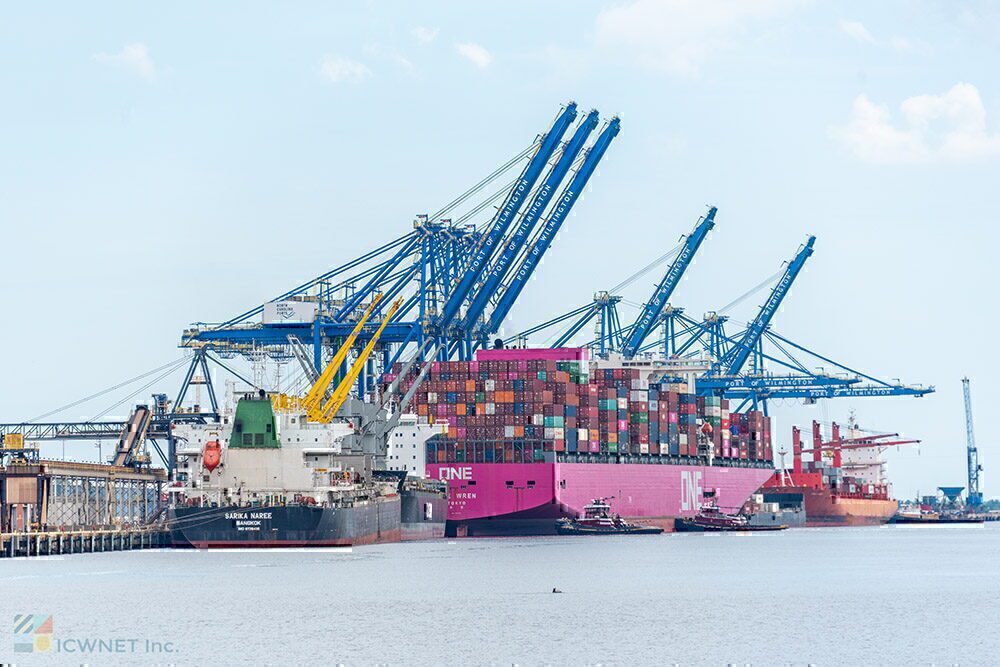 Though the Port of Wilmington is a comparatively new landmark in this centuries-old city, it is nevertheless a fixture along the downtown waterfront, and an integral aspect of the region’s economic success. An unmistakable sight along the Cape Fear River that can be viewed from miles away, this busy commercial port is often humming with activity, from the large container ships that ease in and out of the 42-foot-deep channel, to the towering warehouses that serve as the launching points for international trade.

The Port of Wilmington may be an industrial site that is rarely frequented by everyday tourists, but the scale and visibility of the port makes it a part of every downtown visit. In addition, with centuries-old roots that helped create the formation of the “Port City” to begin with, the Port of Wilmington is an instrumental component of what makes this costal community so unique in the state of North Carolina.

The rise of the Port City
While today’s Port of Wilmington is easily accessible by vessels of all sizes, the Cape Fear River initially earned its name for the rough waters and foreboding shoals that explorers encountered roughly 500 years ago.
The area was initially discovered by Europeans in 1524, (and specifically by the explorer Verrazano under the direction of the King of France), but the region wasn’t permanently settled until the formation of “Brunswick Town,” a site that’s located south from the current Port of Wilmington, and which served as the first capital of the colony of North Carolina.

Situated in a relatively protected stretch of the Cape Fear River, the original Brunswick Town settlement quickly became one of the leading seaports in the state, and throughout the southeast coastline.

As a result of this success, Wilmington became known as a center of trade, politics, and culture of the Colonial Era and beyond, and the “Port City” moniker soon followed. This prosperity was directly connected to the location and layout of the Cape Fear River, as goods could easily be transported inland, and/or exported to international ports-of-call in England, as well as other countries throughout Europe.
During the Civil War - and thanks to the strength of nearby Fort Fisher - Wilmington also remained an operational port community for the bulk of the war years, and was the last Atlantic Coast port of the Confederacy to remain open to trade. Fort Fisher would eventually fall to Federal troops during the largest naval bombardment of the war, (and the 19th century in general), on January 15, 1865, but after a brief period of economic depression and recovery, Wilmington once again regained its status as a center of commerce, and as the state’s primary launching point for importing/exporting goods around the world.

In the early 1920s, North Carolina Governor Cameron Morrison started to float the idea of developing official port facilities within the state, and was a key player in creating the State Ship and Water Transportation Commission (SSWTC). The SSQTC’s mission was to study the options for developing docks, wharves, terminals, and other facilities to enhance on-the-water commerce, and the ensuing report found that an initiative to develop these facilities was not only achievable, but would be a huge financial asset to the state.

The SSQTC was replaced by the Ports Commission a year later in 1924, which immediately went to work on creating these port facilities, but their efforts to secure $8.7 million from the state to develop these ports failed on the ballot, and the endeavor was put on the backburner for the next 10 years.
Despite the statewide setback, both Wilmington and Morehead City embarked on their own efforts to enhance their ports, and these local efforts led to the creation of the Wilmington Port Commission by the North Carolina General Assembly in 1935.
In 1945, the North Carolina State Ports Authority was established, with the sole goal of creating and improving harbors at Morehead City, Southport, and the state’s first “Port City,” Wilmington.

The construction of two state facilities in Morehead City and Wilmington began simultaneously in 1949 with $7.5 million in funds, and the projects were both completed in 1952.

The current State Port at Wilmington was officially dedicated on September 18, 1952, and opened with a 1,510-foot wharf, two transit sheds with a capacity of 158,000 square feet, and a storage warehouse of 86,100 square feet.
In the past 70 years, the Port of Wilmington has continually grown in scale and amenities, in order to accommodate the shipping and trade needs of coastal North Carolina, and hundreds of miles beyond.

The Port of Wilmington Today
The Port of Wilmington is located 26 miles from the open Atlantic Ocean waters on the Cape Fear River, and the complex boasts a 42-foot-deep channel, a 600,000 TEU capacity container terminal, seven container cranes, and almost one million square feet of covered storage space.
Connecting with the railway for easy transportation, the Port of Wilmington’s strategic location means that it is within 700 miles of more than 70% of the U.S. industrial base.
The Port of Wilmington is one of the few ports in the Southeast United States with readily available berths and storage areas for containers and general cargo of all varieties, and the terminal serves container, bulk, breakbulk, and ro-ro operations. With its connection to CSX Transportation and rail service, (as well as access to two of the East Coat’s busiest roadways - Interstates 95 and 40), the port remains one of the busiest launching points for international trade for the Southeast U.S. market.

There are a number of products that arrive and depart from this Wilmington location, including grains, chemicals, furniture, apparel, and automotive parts. Most significantly, the port has been a longstanding hub for wood products and lumber, which has been a primary good that has been imported and exported out of the Port City for hundreds of years.

There are two main entrances to the Port of Wilmington – the Container Terminal and General Cargo Terminal – which connect with the waterfront, and the site’s 6,768 feet of wharf frontage.

Accessing or Visiting the Port of Wilmington
Currently, there are no public tours of either of North Carolina’s State ports in Morehead City and Wilmington, however, visitors who need access to any North Carolina Ports facility can request an escort from the state in advance.
To request port access to the Port of Wilmington, potential visitors will need to fill out a NCSPA Port Access Application to gain entrance to any of the port’s facilities.

While no tours are available, the industrial nature of the site makes the Port of Wilmington an unlikely and unappealing tourist destination, but visitors can nevertheless take in the expansive views of the sprawling site, which are a fixture in the downtown landscape.
Visitors will see the port crossing the Cape Fear River into the downtown area from virtually every route, (and namely US 17 Business), and folks can catch an even closer view by going to the southern corners of the downtown area, close to Greenfield Lake and the Wilmington Railroad Terminal.
Scenes of the Port of Wilmington are also captured and celebrated throughout the city, in artworks, photos, and other wares in local galleries and museums. A good starting point to dive deeper into the Port City’s history as a major trade destination is the Cape Fear Museum of History and Science, which is conveniently located at 14 Market Street in downtown Wilmington.

The Port of Wilmington is by no means a popular tourist attraction, but its stature as a hub of international trade and commerce has helped keep the city thriving for decades.

An unmissable site along the Cape Fear waterfront, the Port of Wilmington is an unmistakable and essential addition to this busy coastal community which has been an economic success story for centuries.